In the United States, the rate of occurrence of rosacea seems to be on the rise. There is a lack of enough data on rosacea, with reported prevalence rates ranging from as little as 0.1% to as much as 22.00%. There is a higher incidence among adults of Northern European heritage with a fair skin. A recent study in Germany has shown that about 12% of their population is afflicted by this skin condition.

Rosacea causes are still unclear. We know that many environmental and internal factors have been shown to stimulate an exaggerated abnormal immune and vascular response. There is convincing evidence that elements such as germs, ultraviolet (UV) radiation, nutrition, extreme temperatures, (skin) barrier disruption, psychosocial stress, and hormones may produce an exaggerated immune response leading to an abnormal neurologic and vascular regulation that can lead to redness and other skin manifestations of this condition.

What are the Different Types of Rosacea?

Based on the look, type and area of involvement, rosacea is generally classified into four major subtypes:

Erythematotelangiectatic rosacea is characterized by a transient facial redness (flushing), combined with a background of persistent redness in the center of the face associated with spider veins also present in most patients.

Phamatous rosacea (Greek word phyma, growth) rosacea most commonly affects the nose (rhinophyma), and presents with tissue enlargement that looks thickening of skin and enlargment of sebaceous (sweat) glands. Despite the tendency to present itself in women this type of Rosacea usually affects males after age of 30. Click here for a picture of this type of rosacea. 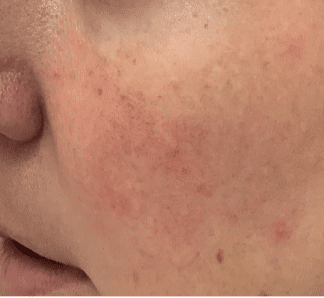 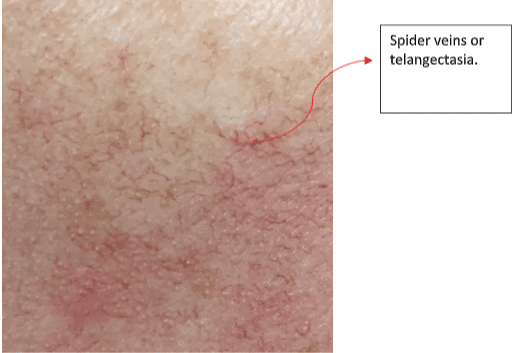 How is Rosacea Treated?

Because of the diverse presentations of rosacea, approaches to treatment must be individualized based on the disease severity, quality-of-life implications, comorbidities, trigger factors, and the patient’s commitment to therapy and patient’s preferred mode of treatment. Rosacea treatment can be delivered by systemic (oral medications), topical such as gels, creams or light based treatments such as IPL (Intense pulse light). As a general rule appropriate general skin care for your skin type will decrease the number of episodic occurrences.

Use of topical treatments such as gels and creams is the treatment of choice in case of mild to moderate rosacea. Metronidazole 0.75% (gel, cream, and lotion; twice-daily application), metronidazole 1% (gel and cream; once-daily), azelaic acid 15% gel (twice-daily), and ivermectin1% cream (once-daily application) are all accepted first line treatment and are US FDA approved and are generally well tolerated by most patients. Some studies have shown a better response to topical ivermectin compared to metronidazole for papulopustular rosacea.

Brimonidine tartrate 0.33% gel (once-daily application) was approved by the FDA as the first line treatment for the topical treatment of persistent facial redness associated with rosacea. Brimonidine gel can decrease blood flow to the small vessels under the skin, leading to decreased skin redness in the majority of patients.

Although oral medications such as Tetracycline and doxycycline in different doses have been widely used the only FDA approved oral treatment of Rosacea is a form of modified-release doxycycline (30 mg immediate release and 10mg slow release). In
patients who are allergic to tetracyclines or have any other reasons not to be on tetracyclines Azithromycin has been used as an alternative although the data on use of this medication is limited.

In more severe cases of Rosacea usually with papulopustular manifestations oral Isotretinoin (widely known as Accutane) is indicated however it is associated with a higher relapse rate after discontinuation of the treatment.

Reduction in telangiectasia (spider veins are dilated small vessels under the skin) is not to be expected with any of the topical agents for rosacea. Destruction of dilated vessels by vascular lasers or intense pulse light (IPL) is the primary therapy to reduce telangiectasia. Light energy is absorbed by red blood cells in the vessels under the skin, leading to vessel heating and destruction. Intense pulse light (IPL) devices are the most commonly used treatment of redness and telangiectasia (spider veins) in rosacea patients.

Beau Visage Aesthetics is proud to provide latest and most technologically advanced rosacea treatment in Walnut Creek. If you are interested in learning more about your treatment options, please give us a call at 415-644 8301 to schedule your consultation with Dr. Kourosh Moazemi today!